If there is one thing we’ve been waiting for over the last 10 months, it is news of the return of live music and now we’ve got it in a big way. There have been whispers of something big coming to the Coast for a little while now and when the announcement came, there was dancing in the street (it’s ok, it was outside, safe).

Speaking of which, we’re allowed to dance again (outdoors at least) and that makes what we’re about to say even more exciting.

Okay. Ready? Guns N’ Roses are coming to the Gold Coast in 2021 and you can buy tickets to see them with your very own eyes from Thursday the 26th of November.

The epic band have made music fans (everyone) dreams come true with the announcement of a November stadium world tour that will kick off in our very own city on Saturday 6th November 2021. Following the hugely successful Foo Fighters and Queen stadium thrillers in the past few years, the Gold Coast has been blessed by the rock gods again.

It’s the first stadium tour announcement since Australia has started to come back to life again and to say we are absolutely pumped is an understatement. The brand new show will see Guns N’ Roses jump from the Gold Coast to Adelaide, then onto Melbourne, Sydney, Brisbane and over to Perth and we suggest you get in quick for tickets.

As the name of GNR’s 2017 tour suggested ‘Not In This Lifetime’, many GNR fans once believed that they would only be able to experience founding members Axl, Slash and Duff sharing a stage again in their dreams.

But then the band’s classic line-up regrouped for Coachella 2016 and the Not In This Lifetime tour was announced shortly afterwards, thrilling fans all over the world until November 2019.

The Australian leg of Guns N’ Roses’ Not In This Lifetime stadium tour marked the first time that Australian fans witnessed Axl, Slash and Duff reunited since 1993’s Use Your Illusion tour and the band’s onstage chemistry was as magical as ever.

Which you can absolutely experience again (or the first time for many) come 2021.

Grab your tickets here, this first announcement for 2021 is a huge one and no doubt everyone else is as pumped as we are to get out there and do some good old fashioned dancing. 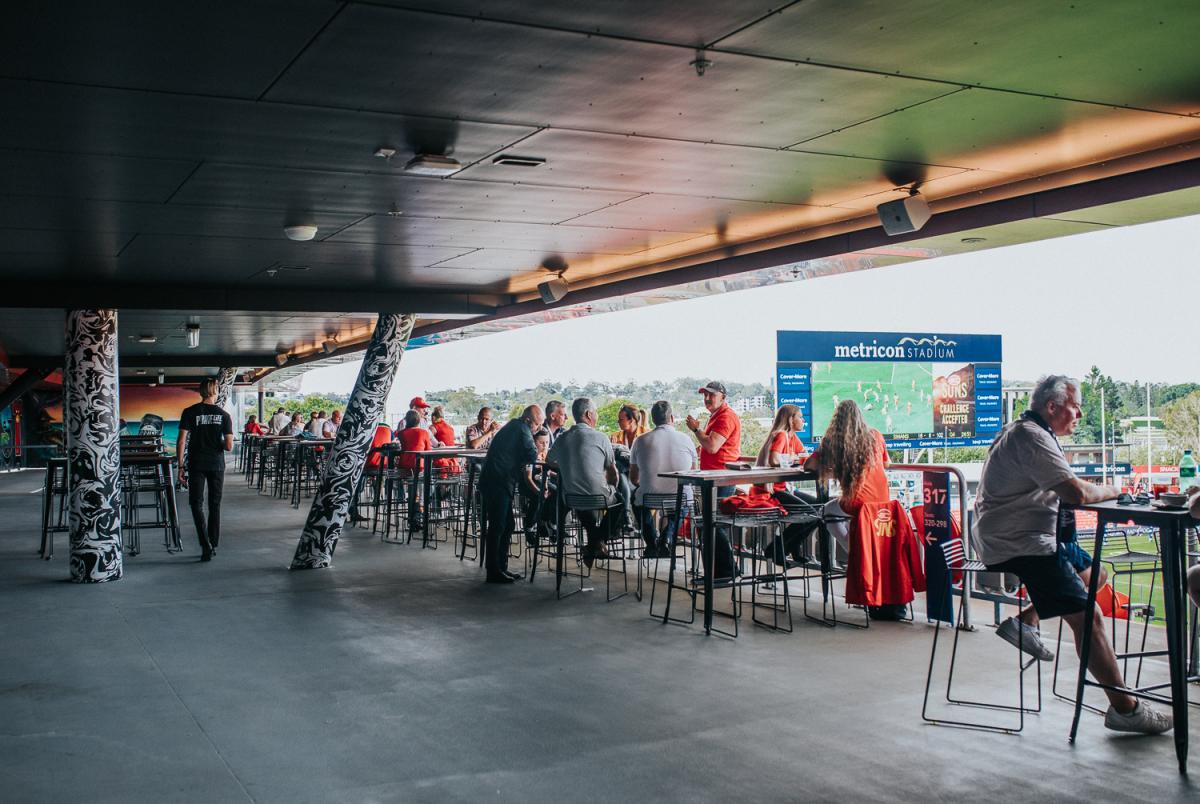 The Gold Coast SUNS are on a winning streak and, if you’re not already, it’s high time you got on board the supporters bandwagon for our one and only AFL team.

With practically a whole new team and coaching staff, we’ve had a cracking start to the season, lead by legendary co-captains David Swallow and Jarrod Witts.

It’s a pretty exciting time for the team and, in turn, those of us who enjoy live sports events in which our team actually wins. And also those of us who like to drink beer and yell things at people who are doing things we could probably (definitely) never do. Anyway, we’re here today to discuss the recently upgraded bar at Metricon Stadium. It’s called The Pirate Life Deck and, yes, it’s sponsored by one of the very best craft beers around, Pirate Life. How good are pirates.

There are skateboards artfully placed about plus some sweet graffiti feature walls to bring up the good time vibe. It’s part of the corporate section of the stadium and we highly recommend treating yourself to a ticket first and foremost because VERY DELICIOUS food is included and secondly, it’s the best possible view with plenty of space to spread out.

There are high tables you can sit at to watch the game slash eat all the foods if you get there early enough to nab one.

Back to the food though. Meatballs and pasta, sliders, spring rolls, party pies and sausage rolls are just some of the tasty treats you can expect at The Deck and, in the interest of honest reporting, we sampled them all and they are all the goods. The food is both brought around by waitstaff and also available for you to help yourself at a station where there is also tea and coffee should you need it.

At the bar, Pirate Lifes’ range of craft beers are on tap and in the fridge there are wine, sparkling and bottled beer options for your sipping pleasure.

The view from The Pirate Life Deck is unrivalled with an epic view of the entire field, it’s all undercover and there’s plenty of space to spread out. 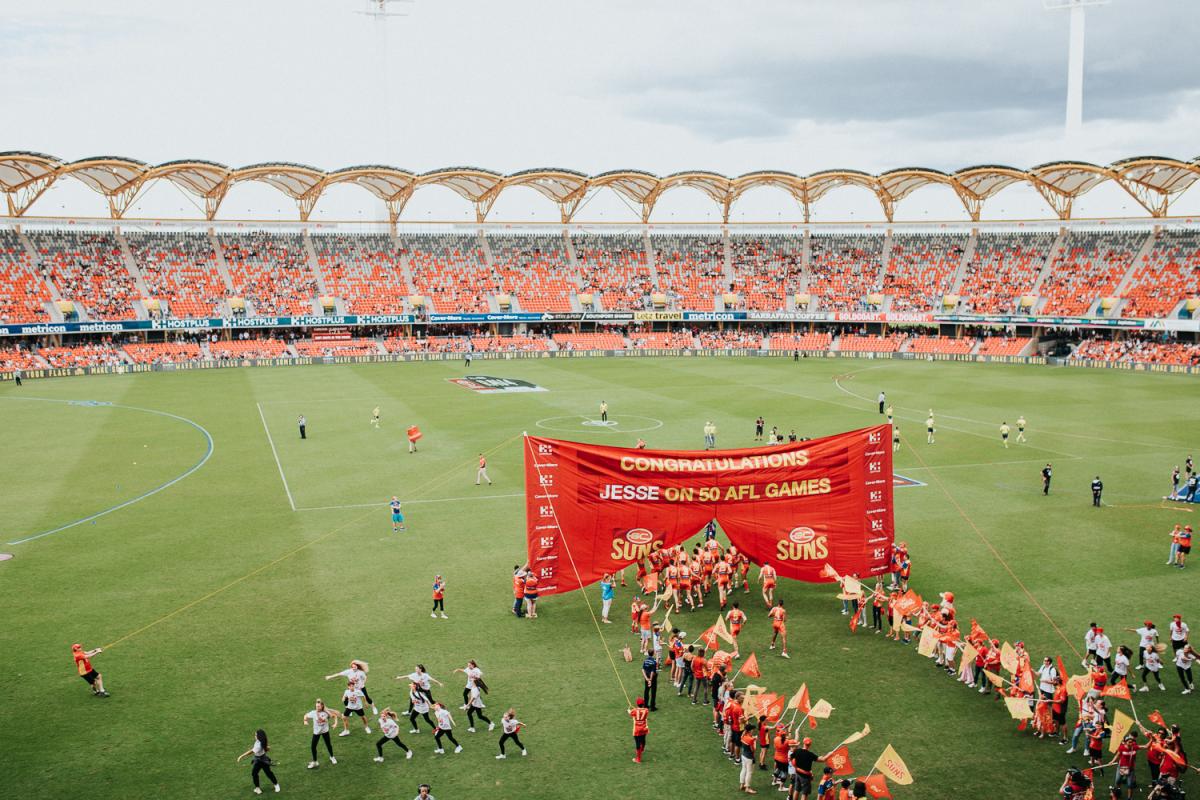 The Pirate Life Deck is the entry-level corporate area at Metricon Stadium. Tickets are $149 per adult and $135 for kids aged six to 12.

It’s one of the best spots to watch the game and you should definitely go check it out for yourself next time the SUNS are playing at home.

Things to do on the Gold Coast at sunset Sunset has to be the best time of the day (some people we know say sunrise, but we wouldn’t know, ahem) — so sunset it is.

Especially here on the Gold Coast, where the pastel colours of the sky are both incredible and almost always ever-changing as the sun begins to dip.

Perhaps you’ve had a big week at the office, have friends from out of town visiting or maybe it’s just been a while since you last appreciated a decent sunset. With winter fast approaching we thought it was more than appropriate for us to highlight the best places for you to enjoy those autumnal hues.

Kick back at a rooftop bar
This one shouldn’t need an explanation… but wait for it. As a city it took us a little while to catch up with our southern neighbours and have rooftop bars, strange, because we have the best weather in the country hands down, right? These days there are thankfully many on the Gold Coast, so, we say make up for lost time and decide on your favourite, pick the best vantage spot, and kick back with a beverage while the sun slips behind the horizon. Go on, you deserve it after all the waiting. Overlook the Gold Coast at Mt Tamborine
The Gold Coast hinterland is obviously the perfect spot for a bit of sunset spying. With 180-degree views of the ocean and eye-catching cityscape in the foreground, you’ll be in awe of just how beautiful our skyline is. There are lots of vantage spots, but we suggest The Polish Place because not only do they offer the very best views, but they also have a toasty fireplace and comforting, authentic Polish food. Why not make a weekend of it and stay a night or two mixing waterfall fuelled adventures with some sunset action?

Take a picnic at Fingal Beach
Ok, so not technically on the Gold Coast. In our opinions, Fingal is almost always forgotten about, making it completely to your advantage. Grab someone important in your life, pack some goodies and pull up a blanket on some of the most neglected and pristine sand within driving distance of home. Pop open your wine (because you most definitely brought wine) — now, with a completely unhindered view watch our Southern sky do its thing. And relax. Sip frosty beers at a surf club
How lucky are we to have surf clubs? SO lucky. Affordable beers and eats, super chilled vibes and, of course, always found by the ocean for absolute bulk sunset-watching opportunities. Grab one of those affordable beers (in jug form, obviously) and pull up a table facing the sea. It’s the most laidback Gold Coast-esque way to enjoy yourself a sunset.

Take a dip anywhere
Yep, so it makes sense that any one of our numerous beautiful beaches, creeks or canals are also the perfect spot to watch the sun go down. Plus, at the moment, the water is an absolute treat so you may as well get yourself submerged while watching the sun disappear. We encourage you to bob around in the waves while the sun sets and marvel at how the sky changes colour. This is living your very best life.

Prep your schedules friends, because another sunset is on its way. If there is a fancier thing to do than sip mimosas on a Sunday morning overlooking the ocean on the top floor of The Darling at The Star Gold Coast, we have not heard about it.

Throw in some exceptional brunch eats, followed by a poolside sipping session and you’ve got yourself the perfect day in our (very well researched) opinion.

Well Gold Coasters, that’s exactly what’s on offer at Nineteen at The Star as of right now with the introduction of their new Sunday Brunch menu, followed by Sunday Poolside Sessions that is sure to be a good time.

The Coast’s most sophisticated rooftop venue has gone above and beyond to offer a stunning brunch menu including of course, beloved Mimosas, Bloody Mary’s and a Breakfast Martini plus a menu meticulously created by Head Chef Uday Huja that’s going to blow your brunch-loving mind.

Nineteen at The Star’s signature Oyster Journey also graces the brunch menu, allowing you to embark on an oyster-sampling experience spanning the New South Wales coastline.

If you’re after something a little heavier (ie hangover friendly), we suggest the hearty Steak & Eggs featuring a Scotch Fillet Wagyu 5+ Steak or our French favourite, the Croque Madame, a ham & Gruyere sandwich, sunny side up egg and bechamel sauce (cheese and butter come at me). You may (and absolutely should) pair your brunch with a premium two-hour champagne package, but the hardest part is choosing which one… Moet & Chandon, Veuve Clicquot or Ruinart?

Alternatively, delight in the one of the bars signature cocktails – the Orange Blossom Mimosa, Pineapple, Peach or Grapefruit Bellini should do the trick.

There are two brunch seatings to choose from – 11am – 1pm or 1.15pm – 3.15pm – and if you’re keen to keep the party going you can pop on outside to the pool for a Sunday Poolside Session. The After Brunch Party will take off from 12pm every Sunday with a disco vibe complete with luxury day beds and magical 180 degree views of the sea and the cityscape beyond.

Sip on Nineteen’s epic range of cocktails while dipping your feet in the sparkly infinity pool and thank your lucky stars you live on the Gold Coast.

In true Nineteen at The Star style, you’re encouraged to pack your bikini and throw on your favourite oversized sunnies and soak up those summer on the GC vibes.

Make sure you book for brunch, it’s definitely going to be a popular event.

WHERE: Nineteen at The Star, The Star Gold Coast, Broadbeach
WHEN: Every Sunday at 11am and 1.15pm