Art is one of lifes’ greatest pleasures and we of the Gold Coast, are lucky enough to be surrounded by exceptional makers, galleries and of course, their art.

Gold Coast art galleries have been opening on the regular for the last little while and it’s very exciting to watch the creations that emerge to fill them.

The latest of which is pop-up gallery BAM!, which not only boasts the perfect name for a gallery that is popping up but is also a sweet new spot for spying and also purchasing new pieces to make your home (and your life) prettier.

BAM! Pop-Up Gallery opened a little while on the highway in Mermaid Beach and it’s an intimate little space showcasing the work of local, national and international sculptors, painters and photographers.

There’s art drawn on skateboards, art designed to bring issues like body image to life, surrealism, nude portraits, all of the things. We’ve already found five pieces we’d love to have, so you better get in quick before we buy everything.

Not only all of that though, the gallery recently held an auction with works donated by well-known artists like Craig Ruddy, Blak Douglas and Abbey McCulloch with over $200k donated to bushfire relief.

A whole new collection was added just this week so there’s plenty of exceptional art you’re going to want in your home.

BAM! Popup Gallery is open until the end of February so make sure you get in there as soon as possible to grab yourself some new art and maybe learn a thing or two while you’re at it.

An art lovers guide to the Gold Coast The Gold Coast’s local art scene has blossomed exponentially in the last few years. Galleries, installations and murals have popped up all over the Coast and local artists are making themselves known both here and on the national scene.

If you’re looking for a unique way to spend a day on the Gold Coast, we’ve got just the answer. Here’s a list of local galleries to help you get your art fix.

Wayne Sorrenson Gallery
World-renowned landscape photographer Wayne Sorrenson opened his very own gallery in Miami in 2020 so we, the lucky Gold Coasters get to peruse his breathtaking art anytime we like. Within the gallery, there’s a huge selection of framed artwork to purchase, as well as a range of gift ideas including acrylic blocks, greeting cards and calendars to name a few. It’s all absolutely magical and a lovely stand-in for the international travel we aren’t allowed to do right now.
Where: 40 Lemana Lane, Miami

Maverick Hair & Art Space
Maverick is a small gallery hosting community art exhibitions and events throughout the year. Headed up by artist Byron Coathup and partner Hayley, the space (also boasting a hair studio) caters for art and design lovers and offers beautiful gifts for purchase from both near and far. Don’t be afraid to head up the stairs and check out the gallery.
Where: First Floor, 1/17 Griffith Street, Coolangatta The Hive Burleigh Heads
The newest of the bunch, The HIVE was opened very recently by Jo Ellings, a Gold Coast artist who has been creating stunning works for over 30 years and is now sharing that talent with the likes of us. Within the gallery you’ll find an array of stunning works to take home with you or, if you’d like to stay awhile why not grab a ticket to one of their workshops and become an artist yourself. There’s also a regular meetup and music night if you want to meet some like-minded folks.
Where: 5/3 Park Avenue, Burleigh Heads

Level Up studio + gallery
The space is designed to provide access to art experiences for young people and adults within the local community and beyond, through public programs hosting a range of creative activations, such as art workshops, artist talks, school holiday workshops, networking events and an exciting monthly exhibitions program. Emerging artists can apply for space and we can all pop in there to check out the magic. So good.
Where: 72-82 Marine Parade, Coolangatta

The Walls Art Space Miami
The Walls is an interactive space that began in 2012 aiming to serve as a hub of creative practice, critical dialogue and innovative thinking around contemporary art. Their annual program focus is to curate monthly exhibitions in conjunction with their successful local artist in residence program.
Where: 4/18 Mountain View Avenue, Miami AW Space
Created by the good people at ArtWork Agency, AW Space is a pretty art gallery slash workshop slash event space showcasing the work of a team of folks whose names you’ve no doubt heard uttered once or twice. They are Claudio Kirac and his equally impressive partners in crime Paul Bow and Laura Strange. All talented within their own rights, the team have combined their forces to create a stunning space filled with beautiful works. Do yourself a favour and get in there.
Where: 2/53-55 Cronulla Avenue, Mermaid Beach

Café dbar
Stop in for a delicious brunch overlooking the ocean and take in the collection of local art and handmade goodies next door while you’re there! The space combines works by local artists with a new store filled with locally made homewares, clothing and creative pieces.
Where: 275 Boundary Street, Coolangatta HOTA
The Gold Coast’s premier cultural precinct, HOTA (Home of The Arts) has been showcasing visual and performing arts since 1986. With an array of exhibitions, cinemas and dining/bar facilities, there’s something for everyone throughout the entire year. In 2021, we’ll see the precinct increase in size with an incredible new six-level Gallery that’s due to open with world-class exhibitions (including Andy Warhol, Jean-Michel Basquiat and more) plus a showcase of incredible local artists.
Where: 135 Bundall Road, Surfers Paradise

Dust Temple
A refurbished warehouse (a piece of art itself) in the heart of Currumbin Waters, Dust Temple and its creative space Hinge Gallery hosts local, national and international artists, musicians and poets. There’s also a fantastic café / coffee shop, so stay awhile and soak up the creative scene.
Where: 54 Currumbin Creek Road, Currumbin Waters 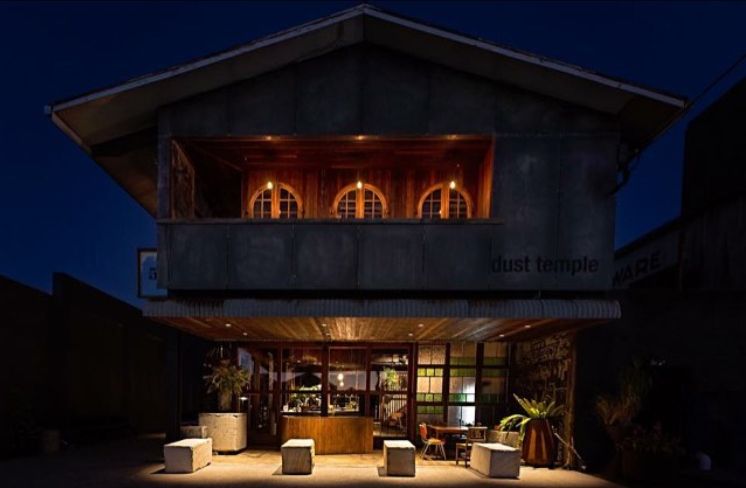 If you’ve done any travelling overseas — or taken a casual stroll through the back lanes of Melbourne — you might have noticed a culture of street art and murals that simply leave you in awe. Not one to be far behind, the Gold Coast has been creating urban-based pieces of art at an impressive pace for the last several years, further confirming our slow burn and steady rise as a hub of culture in the land down under.

You may pass by these pieces without noticing them, or worse, not even know of their existence. And for the sake of the hard work and talent that has gone into them, we think that would be an utter travesty. And as our art scene is only going in one direction (up), we thought it fitting to give you the lowdown on the city’s most notable and impressive pieces of outside/mural art! (listed from north to south).

Water Walls Project — Hope Island
As part of an installation for the Commonwealth Games, Creative Road commissioned local favourite Kiel Tillman (and others) to create some street art on bare spots across the Coast as a legacy to the games, with exceptional results. This piece is an impressive bird painted on the side of an unassuming little building facing the road — therefore, it’s unlikely you’ll miss it.
Where: Oxenford Southport Road & Pendraat Parade, Hope Island

Abbott Park, Parkwood
The Gold Coast City Council commissioned local artist Fiona Hutchinson-Mackenzie to create a community art mural in Abbott Park. Unfortunately, the drive behind it was mostly to deter vandalism. However, good things can come from bad. The beautiful, brightly coloured piece depicts the Surfers Paradise skyline and a little basketball action to boot.
Where: Abbott Park, Parkwood Golden Walls — Ichiban Lane + Davison Lane Southport
You may have ventured past these dreamlike alleys in the Southport CBD and wondered how on earth it’s possible to paint something so good. Well, get this, some of the work was completed in one day and completely improvised — yes, you read that correctly. The artists behind the alley art are world-renowned Brisbane artist SOFLES and Lachlan Hansen – an artist of 40/40 Creative on the Coast. If you’re in the area, we say treat your eyeballs to some clever artwork hinged on depicting Asian cultures within the community.
Where: Off Scarborough Street, and Davison Lane, Southport

HOTA, Bundall
Created by Melbourne-based artist Mike Makatron, the pieces were commissioned to brighten up the cultural precinct, and what a great job he did of it! When you go to check out the newly opened Gallery — as if that isn’t enough — be sure to seek out these two outbuildings. They are a feast for the eyes with so many colourful aspects that you can expect to lose some serious time gazing up at them.
Where: HOTA, 135 Bundall Road, Bundall

Mexicali, Nobby Beach
No doubt you’ve spied this pretty piece on your travels to Nobby Beach on a margarita fuelled odyssey of fun. Designed and painted by local legend Luke Day, the colourful creation has quickly become a favourite Instagram opportunity for, well, pretty much everyone with a phone. In enchanting hues of pink and blue, it’s so Gold Coast, it hurts!
Where:1/2223 Gold Coast Highway, Nobby Beach AWOL Brewery, Burleigh Heads
The innovative crew behind Black Hops are right back at it again with their sister project, AWOL Brewery. With inventive work taking place inside, there was a call to ensure their space looked the goods inside and out. Kiel Tillman was naturally brought in to create some funky and unprecedented illustrative work — be sure to check it out, and don’t forget to grab a beer!
Where: AWOL, 4 Hibiscus Haven, Burleigh Heads

Tugun Fruit Market, Tugun
Does this man ever stop? He’s created countless cool projects over the years, but this one we feel is the jewel in the crown of Kiel Tillman’s talents. The Welcome to the Gold Coast mural painted onto the side of Tugun Super Market is nearly impossible to miss, and for those who have just touched down in the sunshine state: what an entrance!
Where: 499 Gold Coast Highway, Tugun

Feros Care “Grow Bold” Mural, Tugun
The story behind this huge 40m long wall will leave you speechless. The pop-art creation was enlisted by Feros Care and designed and painted by a young boy with autism, Jet, and his hero, renowned Bondi street artist Teazer. Before Jet met Teazer, he hadn’t left the house for more than 18 months. With the help of Teazer, Jet was able to work on something that empowered him to “Grow Bold.”
Where: Corner of Coolangatta Road and Boyd Street (adjacent to the Tugun Community Village Hall), Tugun Southern Cross University, Bilinga
Involving over 50 litres of paint and taking over a month to create this incredible ten storey high artwork is quite an artistic achievement. Created by Guido van Helten, a Brisbane-raised artist, the piece depicts an ultra-realistic-looking man and a woman looking back toward the campus. Taking it in makes you wonder how somebody could paint something so realistic, while at the same time not being able to see the bigger picture (literally).
Where: Gold Coast Airport, Terminal Drive, Bilinga

The Pink Hotel, Coolangatta
The bracing sight of The Pink Hotel in Coolangatta is a somewhat (welcome) sensory overload by anyone’s standard. Like many, we were excited when the dilapidated corner building was given an entirely new lease of life nearly three years back. Part of that is the ever-changing mural wall on the north-facing side closet to the beach. The artwork has recently undergone a new design in conjunction with Stone & Wood and artist Jamie Peters (AKA @poongoat) – but keep your eyes peeled because it won’t take too long for it to change again!
Where:  171 Griffith Street, Coolangatta