Poke bowls quickly became a much-loved healthy meal choice after their recent introduction to the Gold Coast and now Robina Town Centre is on the action with the opening of Suki Sushi.

The idea is that you can build your own poke bowl using fresh, sustainably sourced ingredients that both taste delicious and serve as your non-guilt inducing meal of the day (meaning Coco Pops for breakfast are a-okay).

Suki’s poke bowls are made up of marinated raw fish such as tuna, salmon and kingfish with an array of vegetables and dressings. Variations also include a selection of hot proteins including organic tofu, katsu-chicken and sticky beef, all with the idea of straying from tradition.

Coming into summer, Suki also offers a selection of delicious fruit additions like juicy watermelon and rockmelon so you can create a fruity, Gold Coast-style summer bowls.

But get this gang; you can also build your own sushi burrito with either a seaweed or tortilla wrap and all the ingredients you would add into a bowl. Is that not the greatest combination of your (our) two fave cuisines all rolled up into a conveniently tasty package? Yes. It. Is.

Everything at Suki Sushi is fresh, flavoursome, high in protein, and at around $14.50 a bowl, an inexpensive lunch or late-night working dinner option.

Hailing from our northern neighbour, Brisvegas (does anyone understand this term?), Suki has made the move south to tickle your tastebuds and offer the good shoppers of Robina a fun new eatery.

Suki have also just launched an online mobile app for pre-ordering, which will allow for an express Suki experience and minimal line-ups during peak periods.

Seems Robina Town Centre has become a foodie destination in itself, how fun. Sushi is no doubt a food group (kinda) that is loved by the people. So many varieties, so many tasty flavours, so convenient, reasonably good for you, what’s not to love?

In the interest of bringing a range of food-related articles to your lives, here’s a list of 11 impressive sushi restaurants on the Gold Coast.

Shogun Japanese Restaurant
A Southport fave, Shogun is both an a la carte and Teppanyaki restaurant and they produce some of the best sushi around. They’ve been around for many a moon and won plenty of awards in that time too. Definitely pay these guys a visit quick smart.
Where: 117 Ferry Road, Southport

Yamagen Japanese Restaurant
With a dedicated sushi bar and some of the best sushi masters around creating the goods, these guys certainly deserve a place here. In exciting news, you can choose to be seated at said sushi bar to watch said masters at work. That is a good time, let us tell you. The food is absolutely top notch and you’ll find yourself returning again and again.
Where: QT Gold Coast, 7 Staghorn Ave, Surfers Paradise

Arakawa
Found amidst the sloping greenery that is RACV Royal Pines Resort, Arakawa is a delightful Japanese venue serving up even more delightful eats in traditional style. The sushi is some of the most intricately hand crafted there is and there’s so much stunning variety on offer. Why not treat yourself to a little spa time while after you’ve sampled the goods. RACV One Spa is perfection.
Where: RACV Royal Pines, Ross St, Benowa

Kiyomi
Found at The Star Gold Coast, Kiyomi is another award winner upping the sushi stakes. Their menu, created by internationally renowned Head Chef Chase Kojima, is modern but traditionally Japanese and includes some of the most intricate and tasty sushi around.
Where: The Star Gold Coast, Casino Drive, Broadbeach

Cha Cha Japanese
Cha Chas, as its affectionately known, is one of the most popular restaurants on the Gold Coast and it has been for many years. The food is tasty, affordable and there’s plenty of it. The place is always packed out, so there’s good vibes aplenty and it’s BYO so that’s always a good time. Plenty of vegan and vego options too.
Where: 6/2705 Gold Coast Highway, Broadbeach

Project Tokyo
One of the most recent of the bunch, Project Tokyo is bringing all the very best Japanese eats to the people of Mermaid Waters. The somewhat hidden gem is not only a delight to behold, it’s also got a menu jam-packed with exceptional dishes and yes (obviously) including a big old plate of sushi. Don’t miss this one.
Where: 10a/90 Markeri St, Mermaid Waters

Itsoshin Japanese Restaurant
A little Mermaid miracle is Itsoshin Japanese. Found on the highway, these guys are serving up the sushi goods among other things. It’s been around for quite a long while, so it’s safe to say they know their stuff. Itsoshin fly in the freshest of seafood from around the world too, so that’s always a tasty time. So popular is this restaurant, there’s Little Itoshin nowadays too, find that one in Miami.
Where: 2484 Gold Coast Highway, Mermaid Beach 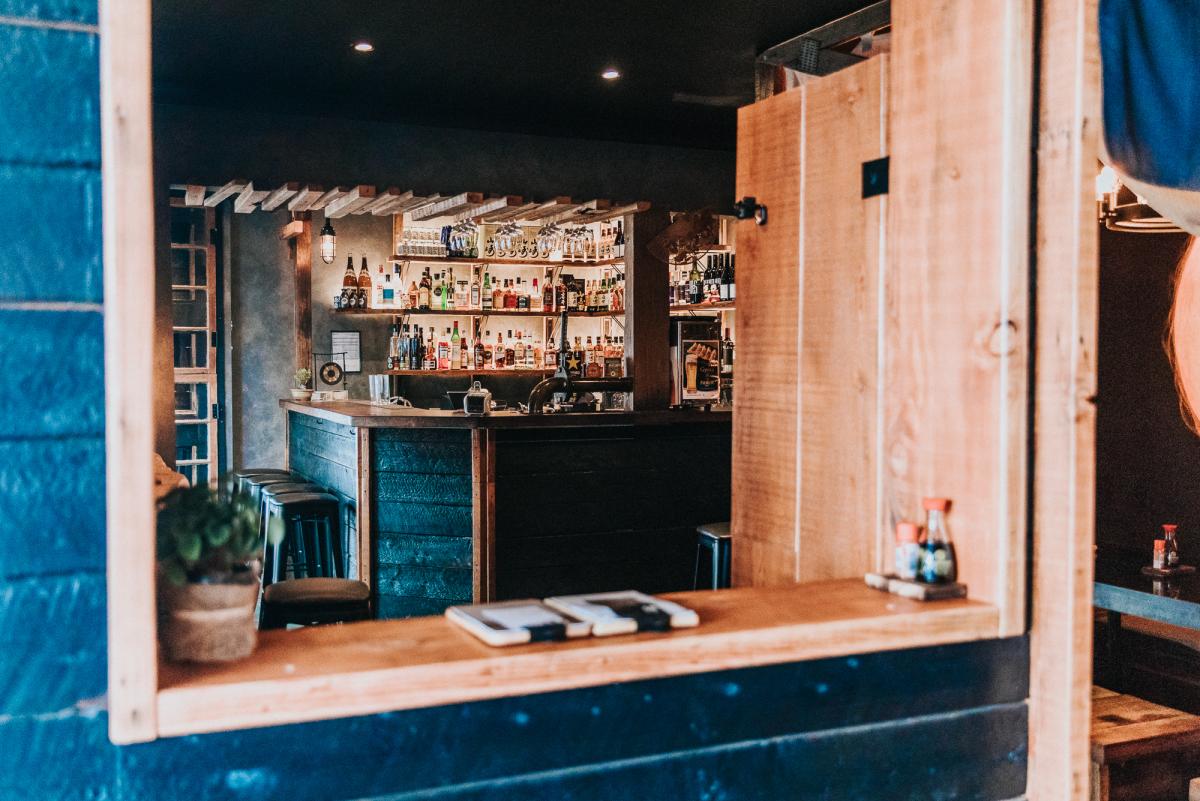 Etsu Isazkaya
As you well know, Etsu is an all time favourite of ours and with good reason. The food is exceptional and the atmosphere always pumping. Everything is artfully prepared and we have never not fallen in love with a dish we’ve consumed there. Of course, the sushi is out of this world along with everything else.
Where: 2440 Gold Coast Hwy, Mermaid Beach

Okazu Sushi Bar
Okazu make some serious sushi. Their rolls are larger than your usual and they’ve got a range of tasty flavours to tickle your tastebuds. Head in to sample the lot we say. Grab yourself a bowl of teriyaki while you’re at it because, delicious.
Where: 1/2223 Gold Coast Hwy, Nobby’s Beach (underneath Mexicali)

Oi Izakaya
One of the latest additions to the Burleigh eating scene, Oi Izakaya quickly became a firm favourite due to their very impressive menu, with a few unique dishes you won’t find anywhere else. Their sushi is of course, the goods too but everything in there is worth eating.
Where: 4/30 James Street, Burleigh Heads

Wazen
A slightly hidden gem in West Burleigh, the quality of the food at Wazen, cannot be overstated. It is just that good. The menu is extensive and we love every single thing on it, but since we’re talking about sushi, grab that goodness to go, or enjoy it outside under the fairy lights.
Where: 1/33 Tallebudgera Creek Road, West Burleigh Look out Gold Coast, Nobby’s Beach is back on the new venue scene in a big way with the opening of three new foodie establishments over the last month and even more to come.

Okazu Sushi Bar snuck in a couple of weeks ago (underneath Mexicali) bringing Japanese soul food to the people via a sleek new space that is pretty much the epitome of Nobby’s cool.

It’s intimate, as you’d expect from a sushi bar, with a huge traditional mural decorating one wall and of course, everyone’s new favourite venue accessory, a neon sign reading ‘you make miso happy’ shining out from the other. The seating is minimal, it’s more of a ‘pop in, soak up the good vibes and grab some healthy eats to go’ kind of deal.

To that end, the food is perfect if you’re into the fresh, good for you and extremely tasty type that’s easy to inhale on the beach, in the office or at home in front of Netflix. Choose your own sushi adventure.

Grab yourself a (quite large and very filling) sushi roll, made fresh daily with flavours such as Chilli Calamari and spicy mayonnaise, Japanese BBQ Crispy Chicken and Smoked Tofu and Asparagus. YUM.

An array of bowls are beautifully presented and filled with nourishing healthy goodness. We love the teriyaki beef, spicy squid and sautéed vegetable best.

The pièce de résistance however is Okonomiyaki, a cabbage-based savoury pancake from the heart of Osaka with your choice of toppings from seafood, CHEESE, vegetarian and teriyaki chicken and beef.

Oh and there’s popcorn chicken, miso soup and edamame which are reasons in themselves to go wait at the door until opening time.

Okazu is modern Japanese food, in keeping with tradition found within a stunning space and created by a team that wants you to feel like part of their family every time you step in the door.

Which you will, a lot.