Happiness has arrived in Nobby’s Beach and it comes in the form of a brand new gelato shop with lots of tasty treats to tickle your tastebuds.

Lik Lik Lik Gelato quietly opened their doors just a few weeks back and already the colourful, good vibe-filled space has racked up a huge number of fans.

Those who frequent Nobby’s on the regular won’t have missed it. The space, marked with bright, old school gelato store-esque flags is just a small one but it’s filled with enough personality to stretch from one end of the Gold Coast to the other.

On the back wall glossy, brightly coloured tiles set the good time scene and two bays, filled with 42 flavours of gelato and sorbet are, of course, the stars of the show. Behind those bays you’ll find Steve and Tim, Lik Lik Lik’s owners and two of the most jovial, life-loving gentlemen there are in the world. They’ll be wearing checked shirts to match the tiles with big old smiles and little wooden spoons outstretched, inviting you to sample all the flavours.

Which you should because it seemed to us that each one was better than the last and it was quite the dilemma to settle on just two (#firstworldproblems).

But what flavours they were. We went with the Salted Caramel plus White Chocolate and Raspberry in a white chocolate dipped cone with sprinkles and it disappeared in record time.

Other tempting options were Italian Marshmallow, Cinnamon and Ginger, Pistachio, Hazelnut Roche and Kinder Surprise. See, we like all the ones.

Not only gelato though, the sorbets are way too good and creamier than any we’ve ever sampled. The Watermelon and Mint is actual summer in a sorbet and there’s a lemon flavour that is a citrus sensation.

Besides white chocolate dipped cones you can get regular chocolate dipped ones with candy stars attached or of course, a good old cup. There are also milkshakes which you should sample as well as (not instead of) a gelato cone or two.

If the actual sweet treats aren’t reason enough to get down there, 80s beats are pumping nonstop and we hear there’s somewhat of a dance party vibe happening in the space after dark because bulk Margarita’s at Mexicali.

Oh AND the gelatos and sorbets are made by Maleny Food Co. and if you’ve ever been up that way you’ll know the lines to get a scoop can take quite the time. The air doesn’t get much fresher and it’s all green and relaxed and pretty much the perfect place to grow cows who make delicious milk for delicious gelato. In what could be deemed the best timing in history, Heven-yah has come to the rescue of heat wave stricken Gold Coasters with the recent launch of their Mermaid Beach gelato bar.

Created with the intention of introducing the traditional style of gelato, the family-owned business hand-make everything in store and introduce new flavours daily.

Using fresh fruit, the highest quality Belgian chocolate, fresh honey from their Grandfather’s beehives and traditional ingredients, Heven-yah’s gelato and sorbets bring a fresh injection of culture to the Coast.

The creamy, cold deliciousness is served in traditional pozetti’s and windows at the back allow customers to watch it being prepared, giving the space a fresh, industrial feel.

Heven-yah came about when sisters Amy and Holly Prosser were travelling in Portugal and learnt the ins and outs of traditional gelato making.

Having never seen anything like it on the Coast, the girls, along with their brother Ben, opened a gelato cart to share what they’d learned with lucky locals.

After a year, the trio decided to open a stand-alone store to allow people in to see exactly how they create their signature flavours.

All gelato and sorbet is gluten free and there’s always a dairy free flavour on offer.

8 places to get lick-worthy Ice Cream 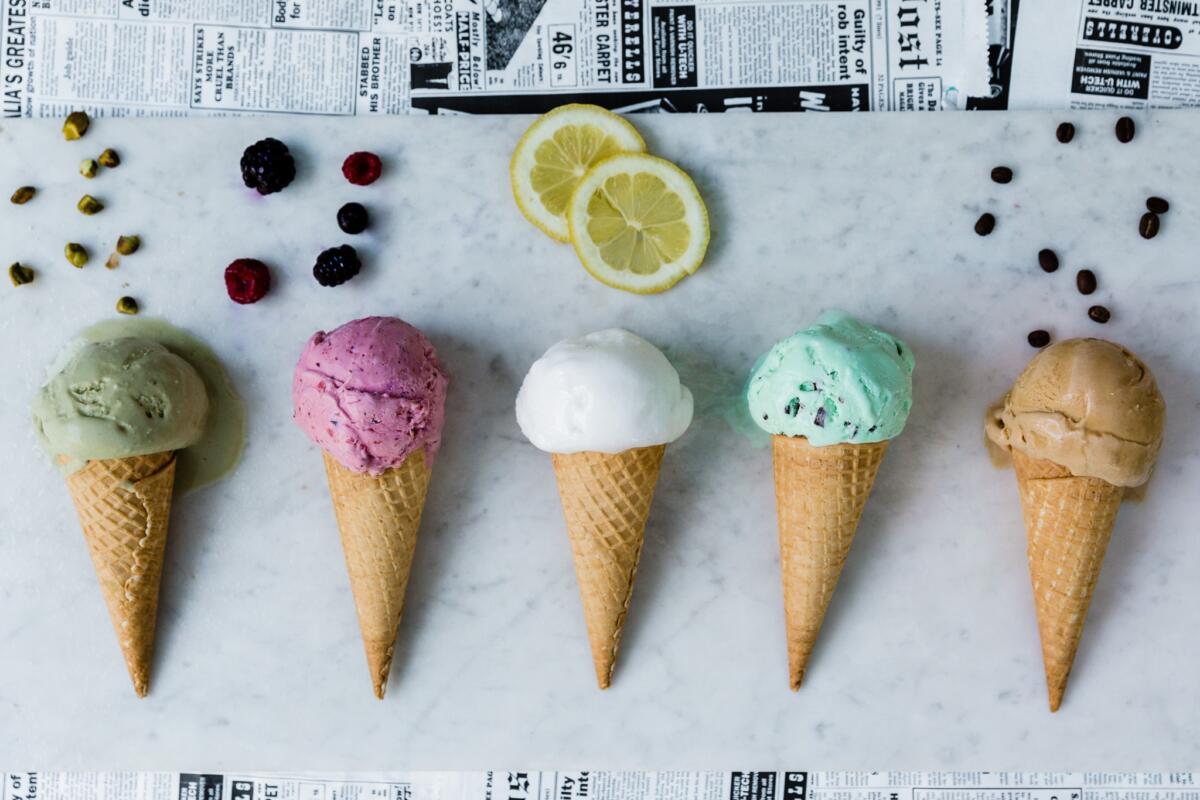 Yes, we know it’s only just turned spring, but we Gold Coasters get excited about anything leading into summer and ice cream always makes things better — so, here we are!

If you’re the kind of person to slowly lick your way through a waffle cone or gobble down a three-scoop tub in under a minute, we’re not here to judge. However, we’ve taken the liberty of finding the 8 best Gold Coast ice cream shops and gelaterias so you can devour their creamy goodness whatever way you desire! Happy licking, folks.

Lemon Lovers Gelato
Some things simply go together well — and gelato with amazing views is right up there. Lemon Lovers is tucked away in Tamborine Mountain with incredible nearby vistas for you to sit and spoil — not one, but — a multitude of senses at the same time! They also do occasional collaborations with nearby beer producers Fortitude Brewing for extraordinary flavour combos: Ginger Beer Gelato, anyone? Enjoy 10% off Gelato & Sorbet here!
Where: 3 Eagle Heights Road, Tamborine Mountain

Lik Lik Lik Gelato
Happiness comes in a cone in Nobby’s Beach, Lik Lik Lik gelato shop will tickle your tastebuds with lots of tasty treats. Go with the Salted Caramel or the White Chocolate and Raspberry in a white chocolate dipped cone with sprinkles. Not only gelato though, the sorbets are way too good and exactly what you need on a warm day. The Watermelon and Mint is actual Summer in sorbet form, and there’s a Lemon flavour that is a citrus sensation.
Where: Shop 2/2221 Gold Coast Highway, Nobby’s Beach Ottimo
What do you have if you take yourself a devoted Italian and then send him to study a diploma from the Gelato University of Carpigiani in Italy? You have Davide, the owner of Ottimo, of course! Rest assured, whatever flavour you opt on taking from this Kirra beachside venue is going to be the goods — it’s all made fresh and on-site daily, after all. Stroll in after an afternoon on the beach and let him and his friendly staff scoop you happy.
Where: Shop 18/52 Marine Parade, Coolangatta

Golden Gelato
This hidden in plain sight gelateria provides a creamy treat every day of the week from early right through to late. Their gelato comes from Maleny and is often touted as some of the best in Queensland; after winning a bunch of awards across the Royal Queensland Food and Wine Show in recent times. You’ll also discover yoghurt fruit pots and sorbets, which are great for cooling you down and are a little kinder on the hips!
Where: 429 Golden Four Drive, Tugun

Rosé Gelateria
Finish a luxurious lunch off at Sanctuary Cove by dropping by this ever-so-cute gelateria, and you’ll be smitten straight off the bat. Their signature scooped cone-shaped into a rose is something to marvel at — but not for too long! Besides a delicious assortment of ice cream, they pour some fantastic coffee and dish up some knockout affogatos. The unsurpassed afternoon hangout on the northern end of the coast.
Where: Shop 39a, Masthead Way, Sanctuary Cove Burleigh Gelato
Picture the scene: it’s late afternoon, and the shadows are growing tall as you head into Burleigh CBD after a majestic day on the beach. Not quite hungry — but you could most definitely eat. The answer is Burleigh Gelato! The array of flavours here is enough to raise the heart rate of even the hardiest gelato fan. Be it Snickers gelato or novelty Red Skin gelato, the selection here will satisfy every taste. They’re also handily available on major home delivery apps and open late — perfect for those late-night sugar cravings.
Where: 9 Connor Street, Burleigh Heads

Heven-Yah Gelato
Owned by two lovely local sisters, Heven-Yah has been open since 2017 but quickly gained a cult following amongst Mermaid locals. The girls create their gelato in-house using only the freshest and highest quality ingredients to produce some incredible flavours. Raspberry Jam & Crema with Sour Candied Lemon? Get down there.
Where: Shop 2/2387 Gold Coast Highway, Mermaid Beach (next to Alfred’s) Ungermann Brothers
When the runner-up of Australia’s MasterChef — hailed as the king of ice cream — decides to open a gelato shop in Main Beach, then you know it’s going to be good. Located in the retail oasis of Marina Mirage means you can mix a shopping spree with ice cream at ease. Flavours are certainly adventurous with such gelatos as Blue Cheese with fig and Salted caramel with crispy bacon. Let your curiosity get the better of you: be sure to check them out!
Where: Shop 11, Marina Mirage, Seaworld Drive, Main Beach