Ben Walsh is the familiar face behind some of QLD’s most loved restaurants including Miss Moneypenny’s (Noosa & Broadbeach) and Fat Freddy’s Beach Bar & Diner. As owner of The Good Time Group, Ben sat down for a chat with Inside Gold Coast about his career to date and what he’s got coming up…

How long have you been a Gold Coast local?
I’ve been in Queensland for 7 years and 1.5 years ago we opened The Good Time Group’s Gold Coast offerings of Miss Moneypenny’s, Fat Freddy’s Beach Bar and Diner and Luxury Gaming Lounge in Broadbeach.

Tell us about how Miss Moneypenny’s Noosa was created, the concept and when did it open?
We opened in 2013, however I had been trying to get a Hastings Street site for some time and very happily secured that site. Miss Moneypenny’s is a brand that I’ve always had in my portfolio, I was waiting for the right location and Hastings Street, Noosa is definitely the right location to open first.

Tell us a little about Fat Freddy’s and how that concept was created / developed.
Fat Freddy’s is just another brand in my think tank that was waiting for the right opportunity to launch. I have always wanted to open a Sports Bar, but we really delivered beyond at this venue, it is really edgy. Fat Freddy’s is not your typical Sports Bar, it’s fun, it’s rock n roll and it has a huge following with Broadbeach locals. What do you love most about living here?
There’s always something going on and although it’s a large city, it has a laid back community vibe. The cosmopolitan side of the Gold Coast is growing rapidly, turning it into an Australian ‘must do’ food and beverage destination.

Tell us a little about your career progression since leaving school?
I travelled overseas to race cars professionally and was sponsored by a man who owned a high-profile bar with some of the best bartenders in world, so once I started working there, I got hooked on the hospitality industry from that point on.

How did you get into car racing?
I have always loved cars, when I was 12 years old, I saved up for a very long time to own a go cart by selling newspapers on weekends. My dad saw how serious I was, so he helped me get into racing and a year later I was sponsored.

Tell us about your time in Sydney working at Goldfish?
I opened Goldfish in 2013, on a site that used to be called The Goldfish Bowl, which was a 24hr dive bar. After I redeveloped the site and it had doubled in size, we turned that into one of the most high profile nightclub bars in Australia, hosting the most high profile international DJ’s on a weekly basis then went on to win many awards including the nomination for Australia’s Bar of the Year and Australian Nightclub of the Year.

How does the rest of 2020 look for you?
I think the outlook is bright and promising, hopefully the borders will open soon and we will get our interstate tourism back. However, under current restrictions we have been very reliant on locals and local businesses which has been wonderful for us, we are consistently full in both venues with locals who return time and time again and absolutely love the venues.

Tell us what is on the cards for The Good Time Group in years to come.  Any more plans to expand?
Yes, very much so. We have some hugely exciting projects on the horizon which we cannot reveal just yet, watch this space…

Tell us your favourites on the Coast:
Cafe for breakfast: Goji Granola Bar, Clear Island Waters.
Restaurant for dinner: Kiyomi and can I say Miss Moneypenny’s? (cheeky smile)
How does your weekend usually look: Exceptionally busy. There are very few things in life that are better than kicking back in the sunshine with your best girls (and guys) by your side and a sweet cocktail in hand.

Of course, you also need to be wearing your favourite outfit and all those things are best enjoyed in a spot that also serves up excellent eats, should you feel the need for those too (which you will).

Surprise. We’ve found the very best spot to do exactly that and double surprise, it’s right here on our very own sparkly shores. Broadbeach, in fact.

Miss Moneypenny’s is the spot, found on Surf Parade in the heart of it all and oozing ever-present good vibes. The latest of which, comes with a side of oysters & spritzers.

Oh how we love spritzers. The team at Miss Moneypenny’s have recently launched Spritzer Sessions which is a) all of the things we mentioned above and b) the very best idea we’ve heard in a long time.

Every weekday afternoon from 3pm until 5pm you can head on into the Broady fave and sip specialty spritzers to your hearts content.

There are four to choose from and they are (in order of the one we’d love to sip first) Paloma Spritz, Passionade Spritz and Limoncello Spritz and of course, Aperol Spritz, if those don’t scream summer, we don’t know what does.

Combine that good time with a dozen oysters, where you can get either natural with lemon or Eschalot Pearl Mignonette for just $2 each and that’s your week made, every single week. Oh and if you’re keen to kick on, which you will be after many spritzers, the team at Miss Moneypenny’s are launching a brand new menu by Gold Coast hospitality God Adam Dundas-Taylor and it’s going to be absolutely next-level.

How exciting is all of that.

Gather the crew and let them know they’re in for a very good time. The wait is finally over Gold Coasters, famed Sunshine Coast venue Miss Moneypenny’s has opened her doors in Broadbeach this week and it’s the very good news we need right now.

The stunning, fine-dining (without the fuss) restaurant can be found underneath Avani on Surf Pde and right next door to the also-very-new Fat Freddy’s Beach Bar and Diner and it’s one you’re going to want to experience at the earliest possible opportunity. Upon entering you’ll be met with a pared back aesthetic, both sophisticated and cosy and perfectly curated for dining experiences from breakfast through to late night snacking.

The interior is made up of low leather chairs set against plush, cushiony booths you could nap in for days. A wooden wave-style ceiling and a stone-backed bar, beautifully lit and stocked with premium tipples are the most eye-catching features and the entire space comes together as what can best be described as sleek, beachside chic. We’re in love.

There’s an outdoor area in the front and The Rimini Room (an equally stunning private dining room) can be found tucked away at the back. 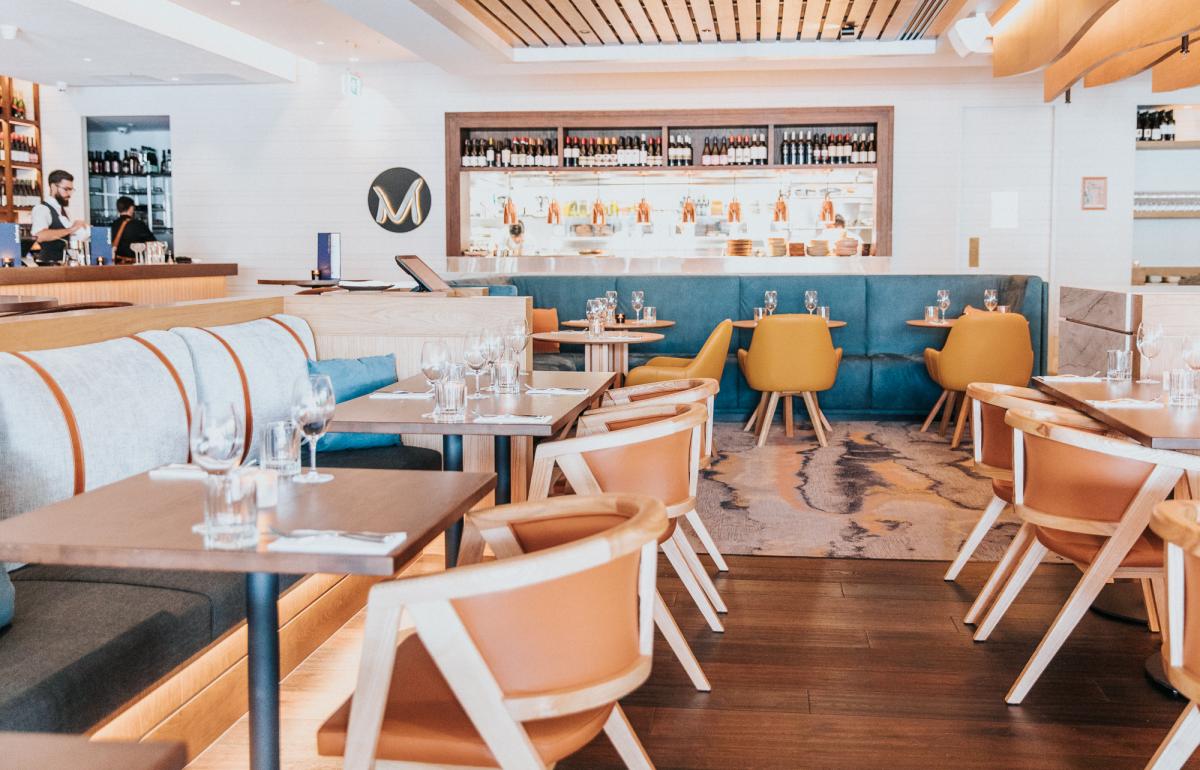 The menu, by acclaimed Aussie Chef Braden White who once headed up hatted Brisbane restaurant Stokehouse Q and was the Executive Chef at Noosa’s multi-award winning Ricky’s River Bar & Restaurant, is as exceptional as you’d expect.

Filled with all the very best options from bar bites to pizzas, entrees, mains, sides and desserts, you’ll want to go back time and time again to taste it all. If you’re in a snacking mood (us, always) you absolutely must order the Mushroom Fritters, Chargrilled Ora King Salmon Stick, Green Pea Croquette and the Doughnut of Smoked Crème Fraiche (life changing) because they are quite simply, taste sensations.

For entrée, the Oakey Beef Tartare with torched gochujang, garlic custard and chilli threads. It’s the best we’ve ever sampled. Because we love the concept of share-style dishes (and want to eat everything) we recommend the Social Share Dining section and in particular the Slow Cooked Lamb Shoulder with spicy chermoula, burnt lemon, chilli oil and watercress. It is melt-in-your-mouth delicious.

If sharing isn’t your thing (fair), don’t go past the Coral Coast Barramundi. It not only looks mind-blowing, it tastes mind-blowing with clam and potato puree, warrigal greens and wood sorrel. 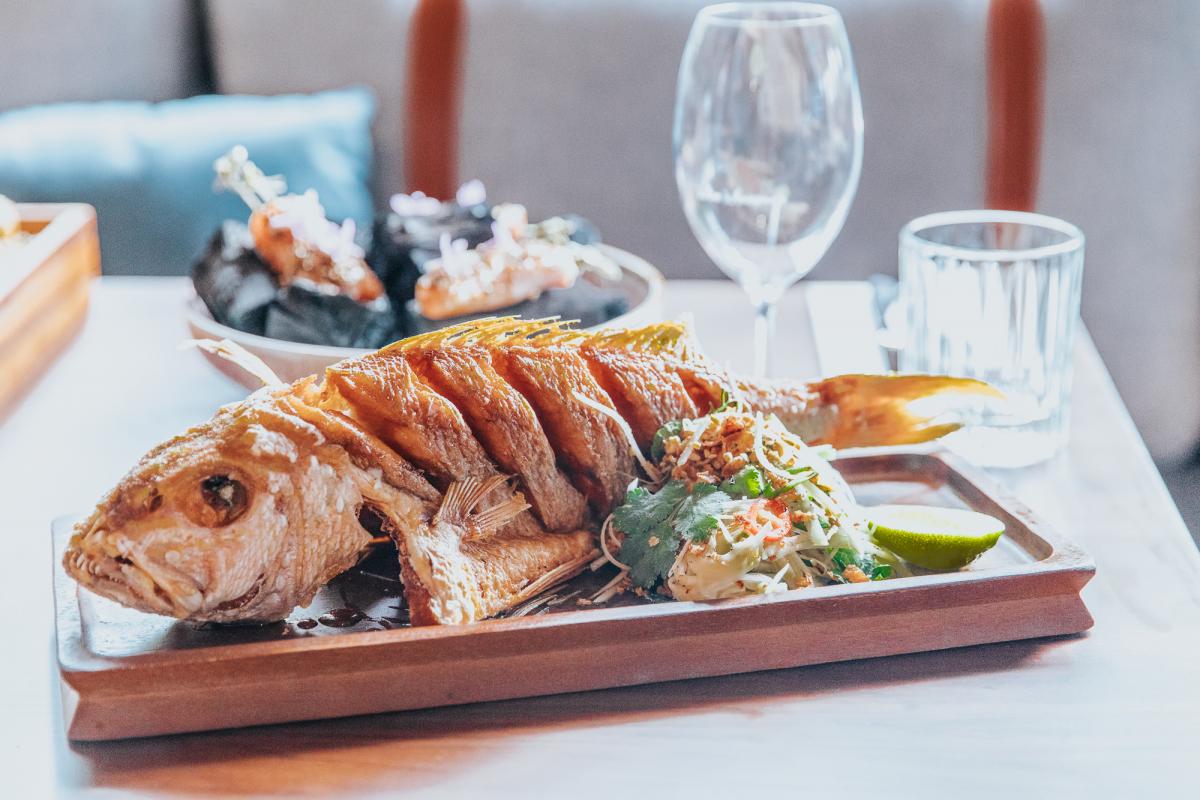 The breakfast menu is equally impressive with tasty dishes the likes of which you’ve never had the pleasure of coming across before now.

Of course, everything Chef White and the Miss Moneypenny’s team touches turns to gold so there isn’t a dish on the menu we couldn’t eat every single day forever.

Cocktail-wise, prepare for something really special. There are MANY to choose from including a selction of Miss Moneypenny’s favourites, sparkling cocktails, an array of gin and tonics, The 80’s Cruise Ship set and a House Crafted section and they’re all exceptional. In case you’re wondering, we’d choose the Kombucha Spritz with Aperol, kombucha, lemon, passionfruit, prosecco and thyme because fresh and oh so delicious.

All in all, Miss Moneypenny’s is one of the most exciting restaurants that’s opened on the Coast probably ever and we have no doubt you’re going to love it as much as we do. Go for breakfast, stay until bedtime is our plan.

LOCATION: 50 Surf Pde, Broadbeach
HOURS: 9am until 12am daily So, it is with great pleasure and very enthusiastic typing fingers, that we bring you news of the opening of Fat Freddy’s Beach Bar & Diner, Broady’s new venue we have been (im)patiently waiting for quite some time now.

As they say though, good things come to those who wait and wait we did, so now good things we have.

And yes, you guessed it, those good things come in the form of spicy chicken wings, loaded hot dogs and boozy milkshakes, all of which are extremely delicious and will be discussed in further detail in a few paragraphs. Fat Freddy’s, underneath Avani on Surf Pde, is an impressive new space drawing on the classic US diner experience and breathing fresh, new life into Broady’s eating scene.

As you enter the space you’ll come face to face with some of the most controversial celebrities of our time including Charlie Sheen and Britney Spears (love you) to name a few. There’s bar and luxe, leather booth-style seating and an outdoor deck perfect for balmy Sunday arvo sessions.

Behind the absolutely stacked bar there are nine screens so you can catch all of the sport your competitive little Aussie heart desires. Let’s get back to the food though because there is a lot of goodness to discuss. Executive Chef Braden White has worked some absolute magic on the American diner classics you know but have definitely never loved as much as you’ll love these.

The Crumbed Jalapeno Poppers are a taste sensation, as are the Breaded Bacon Bits (no words can explain but the flavours are American maple syrup and candied chilli – amazing).

Mac and Cheese Croquettes are made with four cheeses, truffle mayo and Parmesan and all of the good things in the world. Bigger dishes come in the form of the New York Street Dog, a Po Boy complete with a poached Moreton Bay Bug and an array of exceptional burgers. There are also BBQ Pork Ribs, Flame Grilled Southern Chicken and Loaded Tater Tots and it’s probably the best US-style menu we’ve ever sampled (including in the US).

So eat all the things, then wash them down with a boozy milkshake or two why don’t you.

We were quite partial to the Pablo Escabar which is an Espresso Martini slash thickshake with ice cream foam and shaved chocolate and so, so yummy. Spiked Sodas are on the menu too and you probably shouldn’t go past the Monica Lewinski with Wyborowa Vodka, Fay Freddy’s Passiona, lemon and unicorn hair. Trust us.

On top of all that, Fat Freddy’s is home to a luxury gaming lounge complete with private parking and venue entry. How fun is Freddy. Get in there Gold Coasters, it’s going to be a very good time.